“How do you build on Mars?” asks David Malott, CEO and Founder of AI SpaceFactory. “It’s both a technology problem and a design problem - we approached it from both ends.”

Marsha, short for Mars habitat, is a 3D-printed vertical home designed for life on the red planet. A future prospect that incites both fear and excitement from society but an exploration that many believe essential.

The design, recognised by NASA for its ingenuity and feasibility, looks like something plucked off the set of Dune. The four-levelled, egg-shaped structure has a dual-shell specially designed to handle the planet’s extreme temperature swings.

On the inside, it’s “little bubble of Earth on Mars,” as Malott puts it. “It’s very human-centric - we’re not designing a bunker, we’re designing a home for astronauts to live in for an extended period of time.”

The most compelling thing about Marsha is that it’s made from biopolymer —a plastic usually made from vegetable starch— and basalt fibre from the Martian surface. To build the homes, the AI SpaceFactory team proposes to send small robots in advance of human explorers to first harvest the local materials. These materials would then be mixed with the biopolymer to serve as the ‘ink’ to 3D print. “The biopolymer would be the glue and the basalt fibre gives it its strength,” explains Malott.

“There will be nothing more sustainable than going to a piece of land and just building with the material you find there.”

On-site, the homes would also be powered by renewable energy and, if needed, all the materials can be broken down and reused to print another.

While the question still remains if we should even attempt to colonise Mars, the design represents much more than a doomsday contingency plan.

Marsha’s importance is recognised “as an early signal along of a force likely to drive radical change for the rest of this century,” explains Arnold Wasserman, Jury Vice Chairman of The Index Award. “That force is the exploration of deep space and the scientific investigation of the Moon, Mars and celestial objects beyond”.

Moreover, AISpaceFactory’s work could also help us figure out how to build much more sustainably on Earth, as well as how to design for an environment that could become increasingly harsh.

“We can’t continue to build the way we’re building,” says Malott. “This unique challenge of thinking and developing the technology to build on Mars has the potential to transform the way we build on earth.”

“If we go to Mars it can’t be to run away from a failed earth – but rather to gain a more compelling perspective of our challenges here."

Instead of building with resources that are energy-intensive to make, like concrete and steel, we could build with biopolymer and rock - strong, sustainable materials that we can find anywhere, according to Malott. “There will be nothing more sustainable than going to a piece of land and just building with the material you find there,” he explains.

“If we go to Mars it can’t be to run away from a failed earth – but rather to gain a more compelling perspective of our challenges here and now on our home planet,” says Wasserman. “The context then is not survival on a hostile far planet. It’s rather the deliberation about how to design our way through crucial challenges in order to ensure our future survival on a beneficent Earth.”

To demonstrate the technology behind Marsha, AI SpaceFactory is building the first habitat on Earth, named Tera, along the Hudson River just outside of New York. The design may be one small step for humans but what it represents could be one giant leap for humankind. 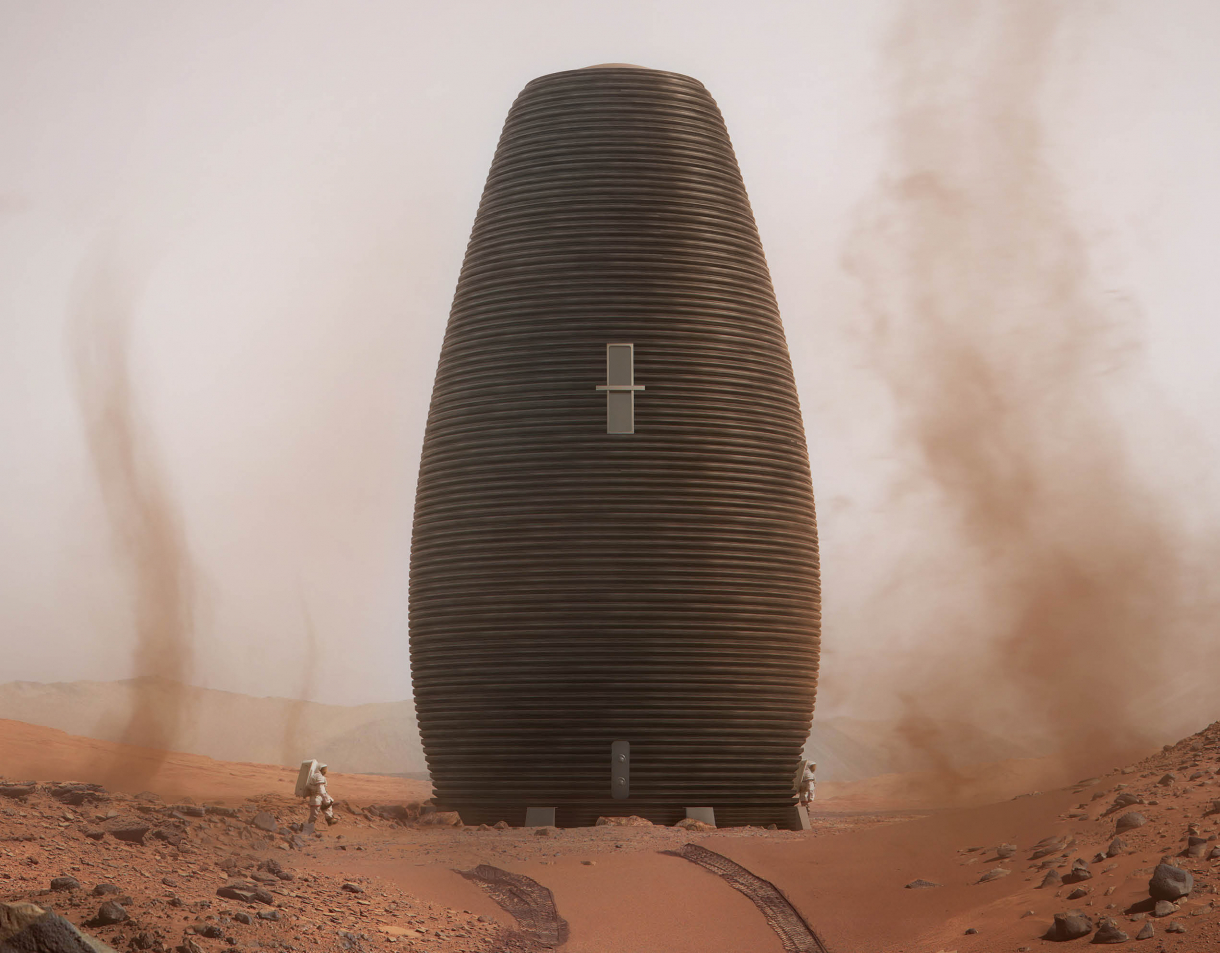